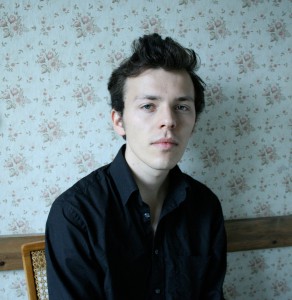 Moritz Simon Geist, born in 1981. His projects range from electronic music performances to robotic sound installations. His robotic installations and performances have so far been shown in numerous European festivals and exhibitions including Ars Electronica 2014, Club Transmediale 2013, Mapping Festival [CH]. He has also collaborated with performers such as Mouse on Mars and Tyondai Braxton. He holds talks on the progression of robotics and society. In 2015, he was awarded the Artist-In-Residence-Stipend for the Free State of Saxony.

His background is both as a classical musician and a robotics engineer, with an advanced expertise in 3-D Printing. Moritz Simon Geist lives and works in Dresden, Germany.

“His concept is treating some important questions of the future, like the perception of technology, the robotization of society or the artificial intelligence, but still comes in a very playful and entertaining way: through electronical music.” (Alain Bieber)

“Turning back to physical roots of electronic music, Geist proposes an open source, hack based approach to different levels of music making – the acoustics, performance and production. His robotic ensembles expose the inner workings of electronic music by turning back to the instruments of the 80s, discovering and illustrating the mechanisms behind the well-known electronic music sound diapason. His proposal expresses a long-term dedication and enthusiasm to his ongoing research on musical robots, with the aim of creating a live performance.“ (Neja Tomšič)